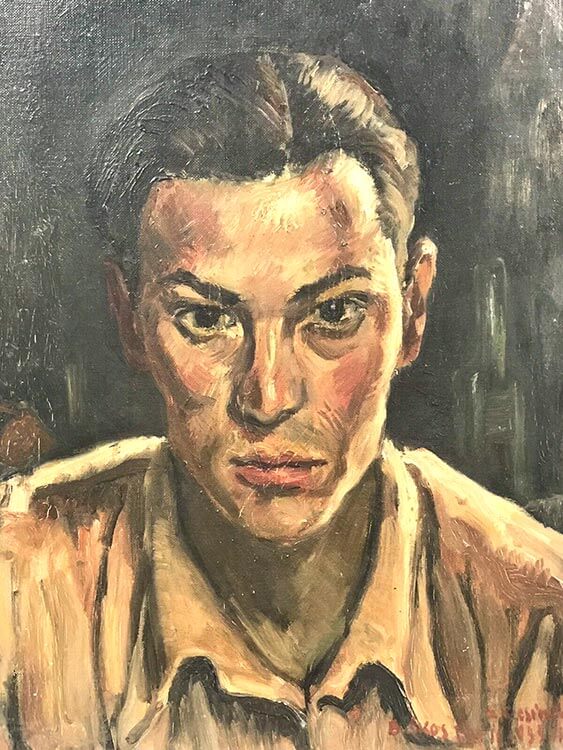 Akos Biro – Portrait of a man

This moody, handsome portrait of a man was painted by Hungarian artist Akos Biro. This is my first signed portrait by a known artist. As usual it was an ebay purchase. This time I had competition. I was up against 6 other bidders, but I managed to snipe and win it with only 2 seconds left of the auction! Heart thumping moment!

This is a striking portrait of a young man. The combination of the broad expressive strokes, the theatrical lighting, and the man’s severe expression and commanding gaze, create a dramatic atmosphere. So Very intriguing!

My portrait arrived with a leaflet written in French, about Akos Biro’s life. On the back there were contact details for Akos Biro fils (his son?). I wanted to learn more about who the sitter was, and although Akos Biro died in 2002, I attempted to contact the email address on the leaflet in the hope that whoever produced this leaflet could tell me more about the man in the painting.

Yesterday, I had the honour of receiving a reply from Akos Biro Jr, who confirmed…

It is absolutely certain that it is a self-portrait, most probably painted in August 1935.Akos Biro Jr

I received some wonderful insights from Akos Jr, which I have interspersed in my blog.

Akos Biro was born in Transylvania in 1911, although he is technically a Hungarian artist, he is very much thought of as a French painter, due to the fact that he lived and worked in France for most of his professional life. He first moved to Paris in 1935 and kept studios in Montparnasse and Montmartre, where he struggled financially, taking part time jobs and supplementing his income by doing sketches on the terraces of La Rotonde, Le Dome and La Couple, the famous artist-cafes of Paris. He lived in Paris until 1939. The war brought him back to Hungary, and he did not return to Paris until 1947. He discovered Provence in the early 50s, and seduced by the light and colors he moved to Mougins in the 70s.


Akos Biro was an important Expressionist and Surrealist artist who was apparently good friends with Jean Cocteau, although apart from a couple of mentions regarding this friendship on art sales room sites, and 2 black and white images on the official Akos Biro site, I can’t find any further information about this.

According to the seller’s auction description:

The painting has impeccable provenance – having come from the artist’s studio and estate in France. It has not had any former owners (except us and the artist’s family) – this is an ideal opportunity to acquire such a work with unbeatable provenance. ebay seller – cathedralfineart

I had no reason to doubt the word of the seller, but although the collection may have come direct from his atelier, that wasn’t proof that the painting was actually painted by Akos Biro.

When I first received the portrait, I spent a few hours researching Akos Biro via the internet. I found a large body of work in various art sales rooms. I discovered that the first Akos Biro Atelier Collection was sold at Millon, Paris on 25 April 2015. His work in this collection is experimental, vibrant, childlike, and abstract. None of these works echoed the style of my painting, so this sparked my initial doubts regarding the identity of the artist, and set me down the wrong thought path.

However, the paintings in this collection looked to be from the 1970s. He appears to have been quite prolific around this time.  So prolific in fact, that his work does not seem to command particularly high prices.

If I had ciphered the inscription correctly, which states Paris, 1935, this tallies with the period that Biro first arrived in Paris. He would only have been 24 at the time of this painting, so he would still have been experimenting with his style. I guessed that this was the reason my portrait was so far detached style-wise from all the other work I had found.

My next thought was whether this was a self portrait. Frustratingly, after researching,  I could only find photos of Biro either middle aged or elderly, so it was a little tricky to compare. Clues that I latched onto were similarities in the eye shape and slope, also the nose shape. There is also the hint of a presence of a mole on his right cheek in the painting, which you can just about see in some of the photos. Also, if this painting was painted in 1935 as I believed it stated in the inscription, Akos Biro would have been 24, and the sitter has the appearance of a young male in his 20’s.

Curiously the artist has signed the painting B Akos instead of A Biro, Paris 1935 VIII (August?). There is also another name present in the inscription. It’s not totally legible due to the thickness of the paint daubs, but after enhancing it, it looks like it could be Kasinek, Rasinek or maybe Kusinek or Rusinek, all legitimate names according to Google, mostly Polish.

This got me thinking. If this is a portrait of Akos Biro, then who is the other person named in the inscription? So for a while I convinced myself that this was not by Biro, but a portrait of Biro painted by mystery Polish Artist whom he met when he first arrived in Paris in 1935.

But after my correspondence with Akos Biro Jr, all these mysteries were solved.

My confusion regarding his signature was explained by Akos Jr:

He signed “Biro Akos” in Hungary where we put the surname first. In France he signed “Akos Biro,” then “A.Biro” then “Akos”Akos Biro Jr

Akos Jr explained further that what I thought was an extra name in the inscription, was in fact the word “Kicsinek” which means “to the little girl” in Hungarian. Akos Jr, went on to say that this is what his father called his mother who was his fiancee at the time, whom he married in 1937. I find this very touching. This painting is more than a simple self portrait, it is a love token.

The most intriguing aspect about this painting are the various scratch marks across the eyes and mouth. I get the impression that at some point someone was annoyed with either the painting or the sitter, and meted out a passionate attack on the painting with a sharp blade! Akos Jr could not shed any further light on this. He says “I think it could be an impulsive gesture from my father himself, later, but I do not know why.”

I have been collecting portraits for some time now, and my blogs about them have always been a bit of a flight of fancy. The lack of concrete evidence would activate my imagination resulting in imaginary scenarios. It has been a rare treat to converse with the son of the artist himself. I am extremely grateful to Akos Biro Jr for generously giving me his time, and sharing personal information about his father and his work.