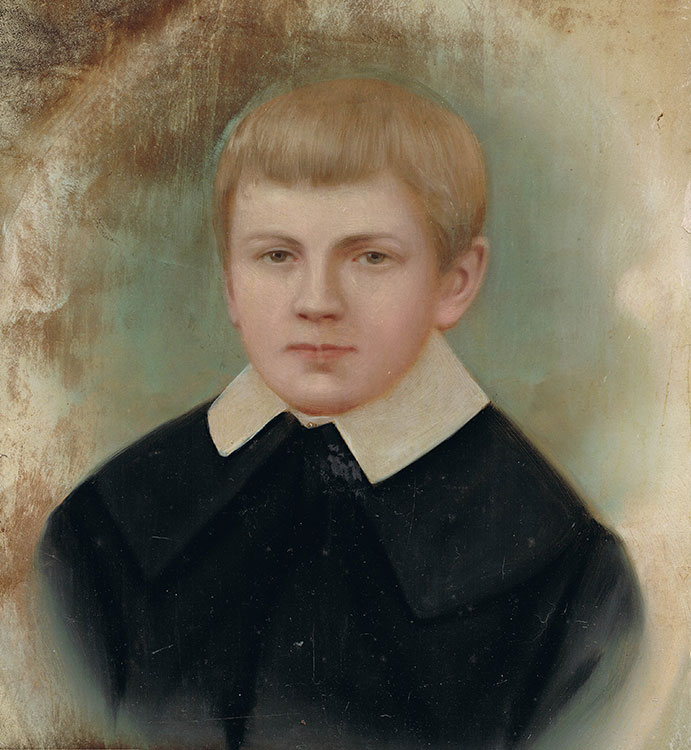 Portrait of an Edwardian boy

I was tempted to name this sinister looking chap Joffrey! But the name Toby popped into my head while I was saving the image on my computer. So Toby he is, or Tobias if we’re being formal.

Yet again, I bought this oil portrait for a song on ebay due to there being only one other bidder to battle with who gave up very easily! Maybe they thought better of trying to outbid me. Did they really want to have this unnerving presence in their home?

Tobias is neatly turned out for his sitting. His outfit is formal. The outer garment has a large cape like collar. My guess is that he wears a school uniform. A clue that Tobias was perhaps either middle or upper class is that he wears a detachable ‘Eton collar’ which was very common before World War I in English prep schools (private schools to prepare the pupils for UK’s elite public schools). They were called ‘Eton collars’ because they imitated the uniform of the boys at the wealthy Eton College. Edwardian, working class school boys tended to wear collarless shirts. It seems to me that his parents held their boy in high esteem, so much so, that although it is painted on card not canvas, they commissioned a portrait instead of a photo.

The portrait looks like it used to be mounted in an oval frame judging by the hints of the shape in the background. It is roughly cropped and has some marvellous distressing around the edges and hastily applied varnish.

I particularly like the creamy hues of this one, especially the eau de nil in the background. This is a personal favourite background colour of mine as it’s coolness compliments the warm skin tones.

The artist has such a light touch, at first I wondered if it was a photo overpainted to look like an oil, but on closer inspection there is no hint of a photo underneath. The strokes are very delicate with some nice feathering to soften the edges. The technique is quick and efficient. Most of the artist’s time has been spent on the boy’s features. The clothing seems to be an afterthought. Just a few quick strokes and it’s done, no attempt to create texture in his garments at all.

There are clues that the artist maybe have knocked these out for a living. (Also a clue that the commissioner wasn’t therefore upper class?) On the reverse, there are remnants of advertising pasted to the edges. I assume these are from the company responsible for creating this painting. On one of the remnants the wording goes as follows…

Correct likeness may be thoroughly relied upon.
(previous text missing)…or four years at the most. We will guarantee each portrait bearing our signature to be what we represent it, whether in Oils or Water Colours and a true likeness. The price of the…(rest of text missing).

It is now four years…(text missing)…paint portraits otherwise than for the trade, which we agreed to do for a short time only; but so successful has been our introduction (the rest is guessed from the existing text cut off…) to the public, that it is with sincere pleasure we have…(well who knows!)

So I surmise from this wording that the artist was part of a printers studio who had also painted portraits commercially. One more remnant bears the name Lloyd & Taylor, Printers, 77 Market (the rest is torn off). I like a good detective challenge. Via Google (thank heavens for Google!), I found a result within seconds. In the Writers and Artists Yearbook 1906, I find an entry for Lloyd & Taylor, 77 Market Street, Manchester. Result! But frustratingly, that’s as far as my detective work took me.

So I can glean that here we have an Edwardian, Northern schoolboy, approx 12 or 13 from a middle class family.

But something doesn’t sit well. Something feels off. His attire and Tobias’ stern expression gives the whole portrait an unsettling air. I’m struggling to put an adjective to this expression. It’s not mischievous, or conniving, it’s more insidious than that. The narrowing of the eyes and the pursing of the lips, the hint of a sneer, are almost imperceptible, but in a Dorian Gray like manner, has the artist inadvertently managed to capture Master Tobias’ soul in this painting?

Looks to me like Tobias has some deep rooted grudges that he’s been storing up. Was it the strict prep school teachers, too quick to dish out painful corporal punishment? Or, if he attended Public school, perhaps Tobias was victim to some particularly harsh treatment while fagging! Or did Tobias have an overbearing, cruel father who created a monster. Whatever or whoever is to blame, that look is positively Machiavellian.