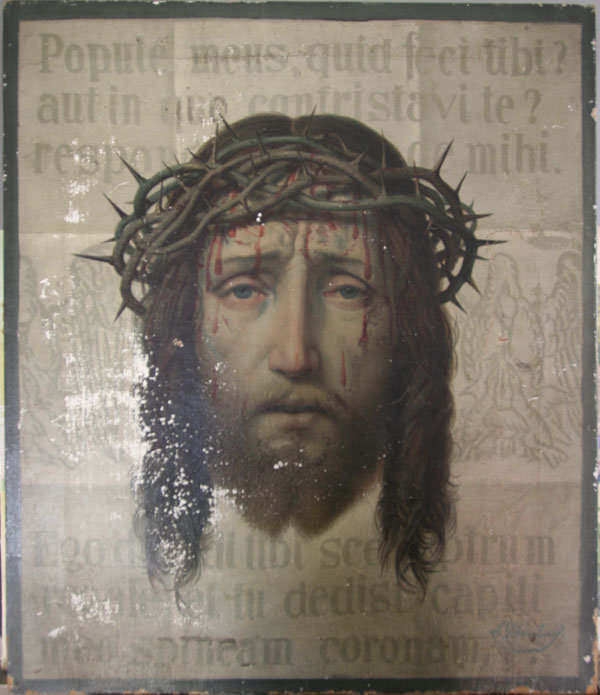 Here is a striking portrait of Jesus. Another ebay find. I don’t think I paid very much from what I remember. It was in a bit of a state but I liked its look. The flaking paint gives it an authentic, distressed look which I find very aesthetic. The lettering and the floating head imagery, give the whole piece a dramatic, bold, graphic art quality.

I’m assuming it was once used in a church. Possibly quite a damp church judging by the state of its condition!

I had seen this sort of imagery before. A floating head of Christ on a piece of cloth. It must be known as something. After a bit of detective work via google, I discovered that this style of religious painting is known as a ‘Veil of Veronica’, also known as a ‘Vera Icon’. According to the Catholic Encyclopedia, the name ‘Veronica’ is a combination of the Latin word Vera, meaning ‘truth’, and Greek word Icon meaning ‘image’; the Veil of Veronica was therefore regarded in medieval times as ‘the true image’ and the truthful representation of Jesus, preceding the Shroud of Turin.

You won’t find it in the Bible, but according to Christian legend, Veronica was moved with pity when she saw Jesus carrying his cross to Golgotha and gave him her veil to wipe his forehead. Jesus accepted the offering, held it to his face, and then handed it back to her—the image of his face miraculously impressed upon it. This piece of cloth became known as the Veil of Veronica. This particular painting is such a dramatic and mournful image of Christ. The nauseous green pigment of the skin and tortured expression, effectively conveys the torment and pain of Christ’s journey to the cross.

At first I wondered if I was about to bid on an original, after all it was described by the seller as such! But the image looked familiar. The style reminded me of Durer. So before bidding I did a little more research. I couldn’t quite make out the signature, but eventually found a similar image on google. Turns out, his particular image was originally painted by German religious painter Franz Ittenbach in 1860, and the one on ebay seemed to match…exactly! I mean every single stroke of hair matched up!  So I bid with the belief that it was obviously a copy…but there was no way it could be painted. Even as a copy, I could tell it had some age just from the frame the canvas was mounted on. I didn’t bid much, but managed to win it. I was curious to know why the seller had been convinced it was an original oil painting.

When it arrived, I realised why he had been fooled (or had he?). It had an extremely convincing faux paint texture. After much delving and research, I discovered that this technique of printing is called ‘Oleography’.

An oleograph is a chromolithograph printed on cloth to imitate an oil painting. According to the Encyclopædia Britannica site an oleograph is a “colour lithograph produced by preparing a separate stone by hand for each colour to be used and printing one colour in register over another. The term is most often used in reference to commercial prints. Sometimes as many as 30 stones were used for a single print. The technique was pioneered in the 1830s but came into wide commercial use only in the 1860s. It was the most popular method of colour reproduction until the end of the 19th century, when more efficient techniques rendered it obsolete.”

I’m not entirely sure if my copy is from this period or a more modern replica, but it has certainly been through the wars!

It’s an amazing technique, and I suspect a few people have been caught out in the past thinking they have an original oil painting (like the seller apparently did) especially if the painting is unknown. You wouldn’t exactly be fooled by an oleograph of the Mona Lisa! It stands up to close scrutiny brilliantly! You can see all the strokes as though they were actually painted in oils. The strokes have more depth where thicker paint would be used, and varying painterly techniques. I’ve attempted to photograph the effect just to show how real the technique looks.  Just see how the beard looks like it is stippled paint!