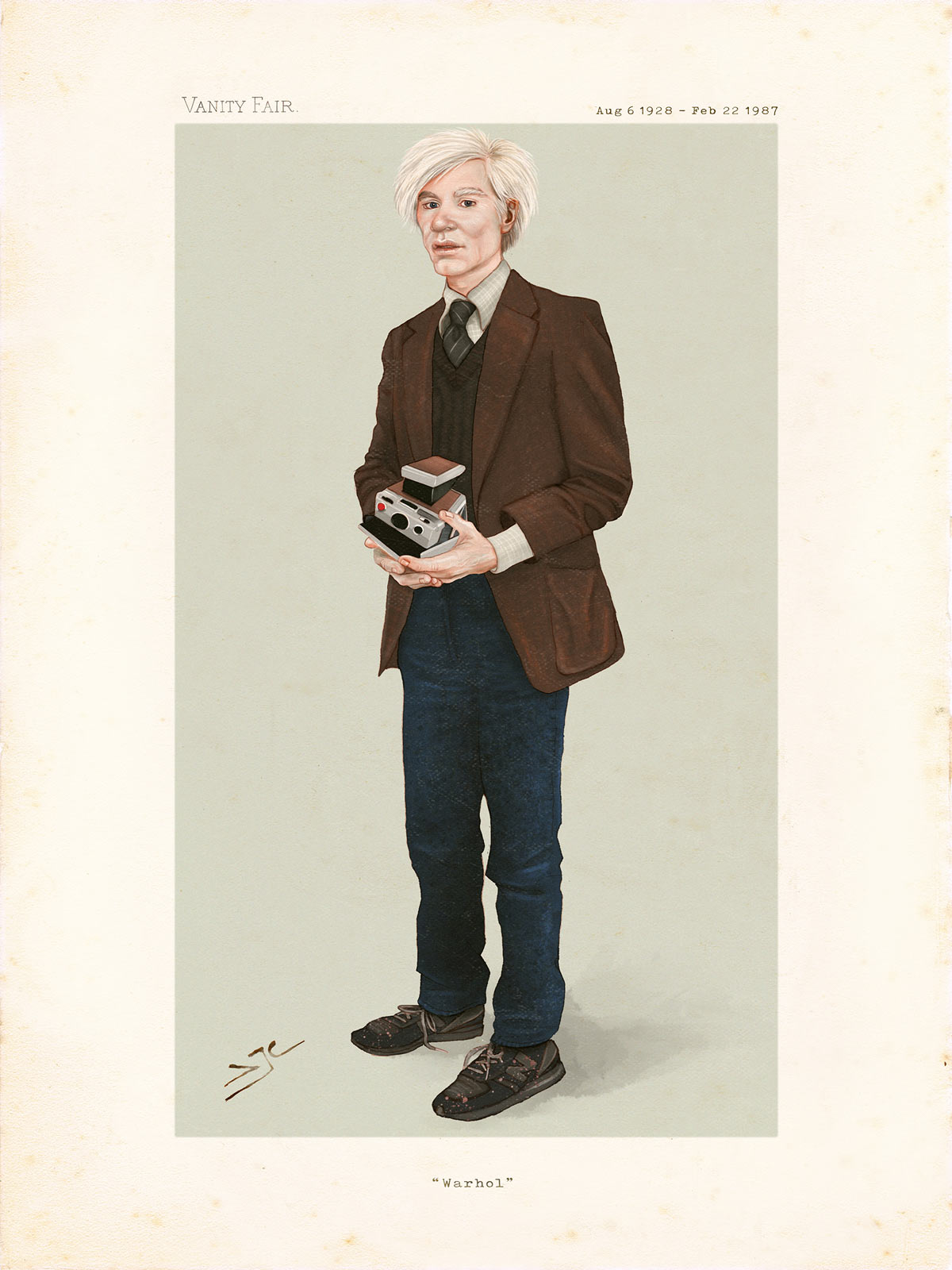 I had somehow evaded any interest in Andy Warhol during my art history lessons in school and subsequent art foundation course. His art seemed to flow over me during this period. He was an icon and his art revolutionary…yadda yadda yadda. Ever present, but he just didn’t register on my artistic radar at all.

But after watching the Andy Warhol Diaries on Netflix recently, it stirred a new obsession in me. I was fascinated, not so much by his art, but by the person, arguably his best piece of art. Like him or loathe him, he doesn’t fail to intrigue.

I set out to learn as much as possible. I read (still reading) his biography, watched interviews on YouTube, watched as many films as were available, and spent hours trawling over images and collected my favourite ones on Pinterest with the aim to produce a Vanity Fair style portrait in the same vein as my Vincent Van Gogh portrait.

I was initially going call this portrait Drella.

Drella was a nickname for Warhol (a contraction of Dracula and Cinderella a description of Andy’s two differing personas), coined by Warhol superstar Ondine, and used by hangers on at The Factory, But as Andy Warhol never liked that nickname, I decided against it. Also, this portrait does not represent him in the Factory era.

‘Songs for Drella’ is the 1990 album by Lou Reed and John Cale, both formerly of the Velvet Underground; written a few years after Warhol died from complications following routine gall bladder surgery in 1987, it is their homage to Andy who was their mentor during their early years. As you listen to it, you can almost visualise a stage musical/rock opera of the life of Andy Warhol with this as the soundtrack.

I listened to ‘Songs for Drella’ in the preceding weeks of doing the portrait, and while I worked on it, I found without fail that the last song on the album “Hello it’s me” reduced me to tears! Why? Maybe because it’s such a heartfelt tribute by Lou Reed to an old friend, full of sadness and regret. Or it could be the mournful violin. Or more probably, as my friend Joan frequently says to me, “it’s yer age love”.

I umm-ed and ahh-ed as to which Andy Warhol I wanted to represent.

I avoided 80’s Andy as I felt his health deteriorated quite a lot towards the last few years of his life and he looked far older than his age (no doubt due to the gangrenous gall bladder he carried around for some time).

So in the end I decided not to do Andy from any particular era, and the eagle eyed might spot a couple of incongruous items that don’t accord with his healthy appearance, namely his Poloroid camera and paint spattered Nike trainers which he wore around the time he collaborated with Basquiat.  I wanted to do an homage, as opposed to a direct portrait, so I cheated a little and brought these forward a few years.

These are gentle caricatures, nothing too extreme. As Leslie Ward (Spy) said:

If I could sum up the art in a sentence, it would be that caricature should be a comic impression with a kindly touch, and always devoid of vulgarity.Leslie Ward – Wikipedia

To see more of my Vanity Fair style portraits visit my portfolio here.

Commission your own, personalised portrait.