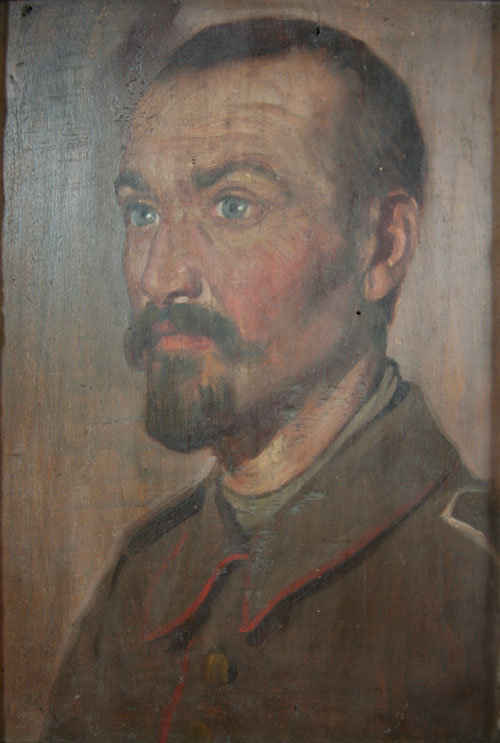 This is a WWI German army portrait of a soldier of the Imperial Army. I bought it off an ebay seller who tells me he got it from an auction in the east of France, but that’s all he could tell me. The sitter wears a WWI German soldier’s field tunic (Feldrock) with red piping which is how he has been identified. The white piping on the shoulder boards indicates he was infantry. I’ve christened him Otto. He has a gentle, kindly face, but he has a nervous expression. The curious inscription in pencil on the back might explain why.

Painted this picture of a war friend
in the trenches
World War 1914/18.

(scroll down to see the pic).

Was the inscription written by the artist, or someone handling the painting later? If the inscription is correct, this is a very poignant portrait. This may have been the last image ever taken of Otto alive while waiting in the trenches during WWI.

It is painted on a rough piece of wood panel and unvarnished, so at first glance it does seem to correspond with it having been done on the fly in the trenches. The artist’s strokes are quick and simple but the skin tones are perfect. He achieves what he needs to achieve quickly and efficiently, which I’m guessing is what a war artist needs to be able to do!

The date in pencil implies, that either the inscription wasn’t contemporaneous with the execution of the painting, or that the portrait was painted after the war as a memorial to a fallen soldier. I suspect it may be the latter. Although loosely painted, it lacks the urgency that you see with other war paintings had it been painted while in a trench. Otto’s posture seems upright and formal as one might adopt for a proper sitting for a portrait or a photograph perhaps. Also it looks to be painted in oil. I know from experience that painting in oils is not a quick process, and can’t be done without much paraphernalia and mess! I imagine a trench would not be conducive to a practical artist’s studio.

Whatever the circumstances, I get the feeling that the artist knew Otto well. His soulful eyes have been painted with tenderness and affection. I do believe these two were close. So I wouldn’t be surprised if they were indeed Kriegskameraden.

We’ll never know for sure whether Otto or his artist friend survived the war.

If any German speakers can provide a more accurate translation please leave a comment below or contact me – I would be most grateful. Also if anyone can confirm or correct my German uniform identification that would be most helpful 🙂

After posting up Otto’s WWI German army portrait on Pickelhaubes.com, one of the posters ‘Bruno’ suggested that the inscription may read differently. He says…

A slightly more accurate translation would be “A war friend painted this picture in the trenches”, suggesting that the writer is actually the guy on the picture.

That puts a whole different slant on the portrait. If the inscription is indeed by his own hand then Otto survived the war and it’s not a memorial portrait.

I asked my friend Jaqcui who is a German speaker to translate (not sure why I didn’t consult her before now!). She translated it as follows:

This painting was painted by a fellow gunman (a comrade) in the trench. World war 1914/18.

So that’s official then, it is by Otto’s own hand 🙂